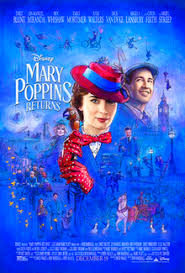 Yeah, I’m gonna get shit for this review. I’m sorry, but Mary Poppins Returns, Rob Marshall’s sequel to the 1964 original just isn’t very good. I wanted to like it. I came in expecting to like it. I love the original. I’ve read the books. I even liked Saving Mr. Banks, even if it is nearly all fiction. In retrospect, that film was a testing of the waters to see if Mary Poppins can still bring the cash. It can, it would seem.

Mary Poppins is the latest of the Disney classics to get a modern update. The difference for this property compared to The Jungle Book, Cinderella, and Beauty and the Beast (and the others already come and awaiting release), is Mary Poppins was already a live-action (okay, hybrid in many ways) film. So it was opted to create a sequel instead. But don’t be too fooled by the events occurring 30-ish years after the first visit from the magical nanny to the Banks household – Mary Poppins Returns is not too far removed from a remake. The same beats and set ups are there with some changes and additions. And it all just feels a little off. Think if a mock-buster company created a competently made Mary Poppins. (Sherry Bobbins anyone?…. d’oh!) It’s familiar enough, just not quite right.

Of course, Mary Poppins Returns has a very high bar to jump over. After fifty-four years, every aspect of Mary Poppins is iconic. I fully admit, to have a sequel that lives up to the lofty original is like walking against the east wind.  So why doesn’t it work for me?

Before we dive into the drawn up issues, let me say: there are moments where it worked. It was nice to see hand drawn animation – or something that looks close enough to it as there are obvious computer assisted motions within. Lin-Manuel Miranda is as charming as he ever is. The supporting character/cameos are all good. We do get David Freakin’ Warner as Admiral Boom and Julie Waters as the maid are re-occurring and always get a chuckle and smile from me. Any movie with either of them can’t be too bad. Angela Lansbury also makes a one scene cameo and song in a role that was clearly meant to be for Julie Andrews. (I’ve read this role was written for Andrews. Andrews turned it down. But did voice a Chthulu like creature in Aquaman, weird) After her one scene in The Grinch, I guess that’s now her thing. But she’s 93, so it’s good to see her in any way we can. There is a sequence with Meryl Streep that is a lot of fun. It’s all about running with goofiness, like the Uncle Albert sequence it copies. However, on the whole it lacks the technicolor whimsy that held the original so dear.

By golly does it copy the original. Let’s go through this: Family Banks have child issues – animated sequence- visit a crazy relative -issues with the bank itself – get lost in the fog – lower class workers sing a jaunty song! – adult female character is working for social justice – Dad comes around – Bank comes around – happy song about the sky

Same flick right? However, there’s more! The original is essentially plotless, Mary comes. Things happen, Dad makes a change, Mary leaves. Like The Jungle Book from 2016, there is another layer added to story to create a stronger through-line. Here’s the thing – it’s dour and depressing. No, I don’t expect a continually happy story but compare: the first time the parents are aloof and wrapped up in their own causes and Poppins sets them right. Here, we have stakes – the Banks are set to lose their house to the bank George worked for (Michael part-time as well), headed up by Colin Firth as the nephew of the head (Dick Van Dyke). Firth makes a villain for the piece, but is rather toothless and underwritten, sitting in his office and growling. This leads up to an inane climax; there is a spoiler I need to mention – but I’ll put that way at the bottom marked up.

Julie Andrews is a goddamed treasure. Replacing her is an a hard task. Emily Blunt, as the new Mary Poppins, sadly, doesn’t fit. I normally love Emily Blunt. She’s one of the actors who can say so much with a glance and look. (Quiet Place anyone?) Her mugging and odd inflections is out of character for her and Poppins. She has the look, but her voice.. it’s weird. The accent she puts on is a mix between high-society and femme fatale. Like she’s trying to be sexy but too stuffy to do it. I’m going to quote my friend Sean Collier in his review for Pittsburgh Magazine as he put it best: “as a femme fatale with the sex appeal extracted, adopting a bizarre tone that’s part sterile flirtation, part confusing derision.” I applaud her for not copying Andrews straight up, but when she talked I was taken right out; it was so unnatural. I was actually reminded of the voice Elaine Carroll used as Dame Maggie Smith for two episodes of her series of shorts Very Mary-Kate at College Humor. Let me just link to that below. (and watch those, they are the best thing College Humor ever did.)

The rest of the cast is wooden and forgettable (outside of Miranda). Ben Whitshaw and Emily Mortimer have an odd chemistry as Michael and Jane; the film seems to know it as it makes it a point to remind us they are siblings, not a couple, multiple times. There are seeds of a love story between Miranda’s lamplighter Jack; but it’s forced as to distract from Michael and Jane. I wonder if there was a version of the script with many of her interactions given to a still alive, dead in this film, wife of Michael Banks, but it was decided to lose one character.

Let’s talk the music. “Simpsoncalifragilisticexpiala(annoyed grunt)cious” did it much better. It’s been a day since I watched the film, and little of the songs have made an impression. None have that zap and power of the Sherman Brother’s iconic songs. I recall there was the one with the lamplighters doing BMX tricks. There is this burlesque/Chicago-like (also from directed Rob Marshall) song “The Cover is Not the Book” that does not fit in any way, bawdy and full of adult humor. So Chicago Poppins even has a Velma Kelly bob cut! Another oddly placed song is about loss. It comes from nowhere and screams want-an-Oscar-nomination. (speaking of loss, Mary Poppins gives an guilty look each time Michael mentions his late wife, as if Mary killed her and Michael doesn’t know).

The animated world sequences are pretty, but feel designed by committee to achieve a certain feeling. They may be hand-drawn in some way, but also have the computer gloss.  Hell, the whole film does. It’s soulless and without the magic that moved through the original.  Not sure where to put a particular criticism, but it doesn’t fit in the film so here’s as good as anywhere. There is an animated high-speed chase sequence with evil bad cartoons we see only this once. They kidnap the youngest child and the other two have to chase them down. Like the Chicago number, it doesn’t fit in Mary Poppins.  All that much odder is it’s implied Poppins herself made the kids go through this chase. I’ve always presumed Mary controls these worlds as part of her Time Lord powers.

I’m disappointing in Mary Poppins Returns.  It’s underwhelming, with unremarkable songs, an off-putting performance by Blunt as the titular character, and just lacks the imagination and energy of the 1964 film.

***Spoiler; the so called villains plan is undone via Dick Ex Machina. Dick VanDyke shows up as Dawes, Jr; says problem is solved. And then does a dance. and the first movie’s message is thrown away here as George did invest the tuppence Michael wanted to use to feed the birds. Capitalism for the win!****