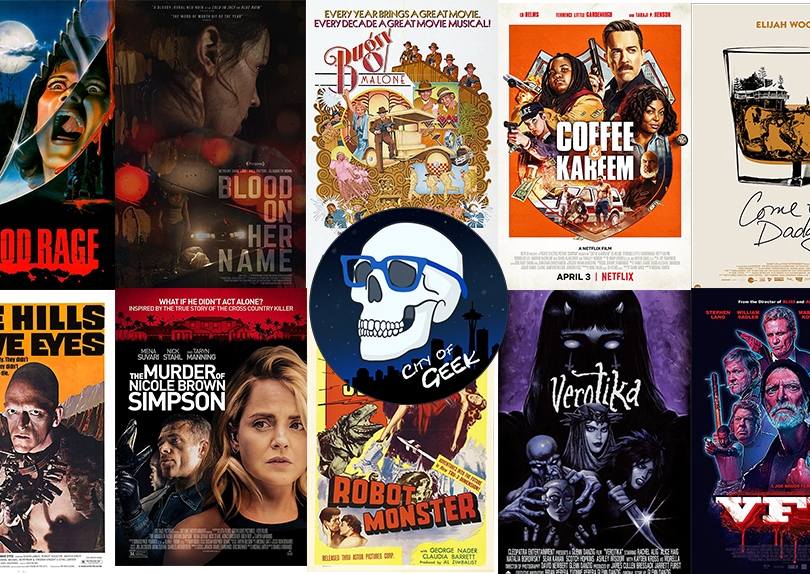 Bob here! For a while, I’ve been trying different ways of giving a set of small reviews in the form of a daily log. Did it in a monthly document, but always missed a bunch of days and felt guilty.

And then tried a long form daily log, but that become cumbersome with length and tags. Instead, now, I’m going to try to post a set a day in their own page.

I’m going to stop writing the date I watched the films, so I don’t feel two months behind…

The classic, cough cough… er, loosely using that word B-picture is known for an early awful sci-fi. A family and one random dude are the only survivors after a silly looking alien – a gorilla suit with a diving helmet -takes over the world. Lots of repetition and a kid doing dumb things because why not. Silly and dull, but the riffing on this season 1 episode of MST3k is great.

The Wes Craven classic (actual use of the word here) has just as much dirty, grimy, ill-feeling terror as it always has, even after countless viewings. Although I do like the remake more, the original is a continual exercise in tension and unease. Great love to Michael Berryman and Dee Wallace in early roles for both.

Fuck yes. Begos gives another love-letter to earlier decades of grindhouse cinema with a gooey, candy-colored take on Assault on Precinct 13 (itself a take on Rio Bravo). Sometimes the lighting and camera choices make the action a little hard to follow, but that’s my only real demerit. Gathering a cast of older character actors, including the always awesome Steve Lang, Fred “The Hammer” Williamson, Bill Sadler, George Wendt, and others, it’s a wonderful joy watching them take on old-school movie punks as the punks (may be mutated from drugs? They smash real easy and bloodily) lay siege on a VFW bar. Pure love.

After watching and loving Blow the Man Down, I was let down by this small-town-crime flick. An accidental kill causes a spiral of hell for a woman and her family. The other reviews are very strong, so maybe I just watched it too close to Blow the Man Down. The performances are good, but I just felt it was so damned standard of the subgenre.

And now the title song is back in my head. I love this nearly forgotten oddity of a musical. Earlier this year I made sure to make this my first pick in our musical podcast and I do so for good reason: peppy songs from Paul Williams drive a 30’s gangster story with a twist. The twist? Bugsy Malone performed entirely by pre-teens (including Scott Baio and a wowing Jodie Foster) and everything is scaled down and kid-ized. But not in a cloying manner, writer-director Alan Parker makes sure it’s done with real clever changes. It’s streaming on Pluto. Check it out.

Elijah Wood and Steven McHattie in what may be a two-hander of weird father and son in a secluded house? Bring it on. It’s bigger than that, but I’m not going to spoil the wonderful twists and shifts this insane move goes through. A dark comedy-horror-thriller through and through his was right up my alley. If you’re a regular reader of this site and like what we like… you’ll love it too.

Instead of writing shit down, I’m going to send you over to our new podcast THE WORST MOVIE OF THE YEAR of which Verotika was our first episode. Listen to me, Tony, Seth Sherwood, and Jason Weiss talk about this pile of garbage.

This was a new one for me, watching through Joe Bob Brigg’s Dinners of Death (as was the much seen Hills Have Eyes above). Several great gore gags and hilarious performances (this ain’t cranberry sauce!) liven up an incredibly cheap slasher film. I had a blast. Incredibly goofy and a lot of fun!

Daniel Farrands follows up his despicable Haunting of Sharon Tate (our next episode of The Worst Movie of the Year) with the even worse revision of Nicole Brown’s murder by OJ Simpson.  Or was it Nick Stahl as an unrelated serial killer??? Duhduhduuuuun! That’s what this awfully written, shot, and performed (Mena Suvari and Taryn Manning are normally decent performers but feel like rehearsal takes) movie sometimes portends. Sometimes that is, as it gives conflicting accounts within it’s own narrative. And just as last year’s Manson film, does the titular character dirty by in many ways putting her own murder on her.  And worse of all, it was some idiot’s truly disgusting decision to include ACTUAL CRIME FOOTAGE from the murder. Showing the real woman’s body is cheap and exploitative. Look, you know me, you know I love exploitation films but this is so far over the line to the crassness people don’t respect horror think we like. Fuck this movie.

This Netflix exclusive comedy is better than it’s very negative reviews would lead you to believe. It’s not all that good, but I got many solid laughs and enjoyment out of it. There is an issue where much of the humor is sophomoric and leans on “hey a pre-teen is crude and does idiotic things!” (anyone who spends times with any young person knows they do), but past that there are some good set-pieces that build jokes well and may fun characters. The basic plot is this: Ed Helms with a white tool of a cop, dating a black woman and her wanna-be-streets son hates him for it., so he tries to get Helms hurt but they witness a murder instead. I came in with very low expectations, but came out with some good marks.

There we are! See next time!