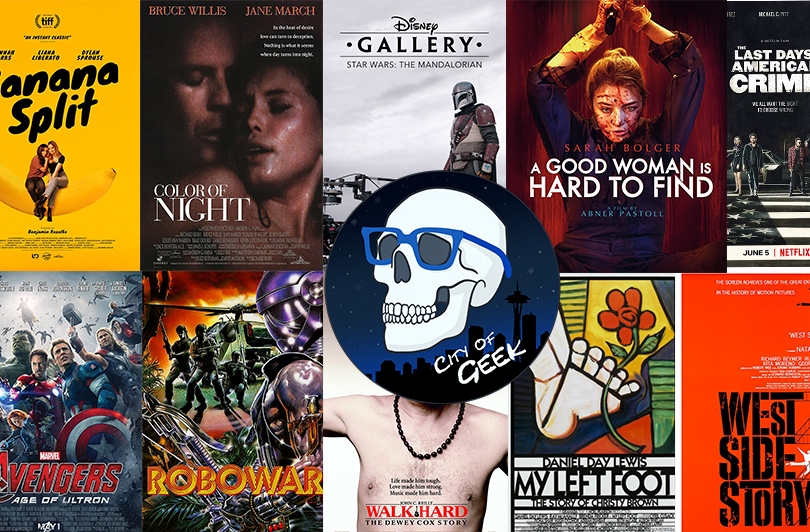 Weird out of the Marvel movies, this is the one I’ve seen the most. Thank my wife due to her love of Scarlet Witch and Quicksilver. I’m not complaining. I do love it, although not without it’s faults. Besides the forgotten Iron Man 2 it’s where we do start to see a little sagging in so many set-ups with and without pay-offs later on, some clunky plot mechanics, and a handful of weird character moments (like trying to make black widow and Hulk a thing). But it also has the most amount of time with the Avengers together, being themselves and bouncing lines and personalities off one another. The scenes of them hanging out, or working through problems are the stronger parts and show how well the writers and actors know their characters. James Spader is a great choice to voice Ultron, although he becomes  disposable villain.

This DisneyPlus 8-episode series looks at the making of the best Star Wars since the Original Trilogy – The Mandalorian. Many think the Disney-era Star Wars is cynical and money-grabbing. This show refutes that statement. It is clear when watching the adventures of Mando and The Child there is a deep love of Star Wars, adventure, and storytelling.This behind-the-scenes proves it to be true. Set up as a series of roundtables with Jon Faverau, Dave Filoni, and whomever else they have for a particular topic (directors, writers, special effects, etc) align with on the set/in-the-workshops interviews and footage, there is a great joy in seeing how much everyone loved what they were doing. This a love letter to the source, and a great exploration of how to build an amazing new branch of an existing property while pleasing the fans without being fan-service.  Endlessly fascinating and exuberant. This is Star Wars. This is storytelling.

Six months before the Spielberg directed remake’s release (hopefully), we decided to do a rewatch of the 1961 original. The musical update of Romeo and Juliet is such a brilliant film, filled with amazing choreography, memorable songs, and low-key great performances – Natalie Wood in the climax… oh boy. Okay the singing isn’t always great – despite being dubbed- and the brownface is problematic. But the story and the trust behind it still reflects to today (which makes me very curious to how the new version will work with it), star crossed lovers is always a great story, but the notes of systemic racism (“America” digs in), escalation from emotion instead of cooling down logically, and other bullheaded things people do. It’s a 2 and half hour epic that absolutely flies by, continually engrossing even after so many viewings.I love the use of color and sets – those dark blacks in isolated sets despite being part of the Big Apple give an eerie feel. Interesting to think there are only a handful of adults present and pretty much everyone they encounter is part of their circle. It’s a fantastic choice that focuses on the character’s world, bouncing into each other with narrow focus.

Don’t listen to what some sites might tell you, the 19 minute longer director’s cut of this pseudo-erotic-thriller is still a bad movie. It’s the only cut I saw, and if this is the better cut, I can’t imagine how the theatrical one fared. One of many thrillers to come in the wake of Basic Instinct, Color of Night is an overly long, often hilarious, over-written easy to solve mystery featuring bad drag, gun fellatio, a bunch of awesome character actors (Brad Douriff, Lance Henrickson, Kevin J O’Conner, Leslie Anne Warren, etc), a slight excuse for the title, unsafe cooking practices (steak in JUST an apron, and – yes – one shot of Bruce Willis’s Willie. My favorite bit is the over acting of Ruben Blades. He seem to be the only one to realize how tepid his movie is. There are some awesome moments of hilarity but with a 2h20m runtime it often drags, but glad to finally see this notorious stinker.

Sarah Bolger is such an underrated actress. In A Good Woman is Hard to Find, she plays a struggling Irish mother of two, struggling after the loss of her husband. This is a big year for woman-led Small-Town-Crime flick, after Blow The Man Down (whoo!) and Blood on Her Name (meh, though I seem to in the minority of that). The trappings of the story go the expected way, but that doesn’t stop the film from being gripping and tense.

Many of the other reviews of Banana Split make quick reference to Booksmart. Both feature strong women characters and their friendship. But outside of that, both are very different movies, well that and both are freakin’ fantastic.  Hannah Marks co-writes and stars as a young woman who just graduated high school and also broke up with her boyfriend of two years (Dylan Sprouse). She’s not taking it well. She targets the boyfriend’s new girlfriend (Liana Liberato, Light as a Feather… oh hey go watch that too)  in order to destroy her… and they become very quick best friends. Marx and Liberato have amazing chemistry and you may scoff at that set up, but said chemistry really sells it. There is solid humor in their situations, and great writing of this transitional time in the lives of the four leads (there is another boy in the mix, Luke Spenser Roberts, in a scene-stealing but also low-key performance… it makes sense in the movie). Available through your library with Hoopla,check it out. Also ignore the pooster on Hoopla, sells a different type of movie.

Haven’t seen this since theaters and it holds up. I feel this great take on the musical bio-pic has been a little lost, coming in when many were tired of Apatow – as every popular artist begins to get backlash just for remaining successful. John C Reilly is pitch perfect as the musician recounting his life, and the supporting cast – particularly Tim Meadows, Kristen Wiig, and Jenna Fisher – play with the just the right level of false sincerity found in the type of movies Walk Hard riffs on. It really nails down the on-the-nose dialog and moments that keep me from enjoying most bio-pics – much of the dialog can be ripped directly from these flicks.Add in a whole bunch of celebrity cameos with the constant repetition of the names of the people their playing and we got gold. There is a real sincerity in the presentation, not mining for easy slapstick gags (mostly), not to mention very well done songs. I was glad to rewatch it and glad it was still damned good. One of these days I should watch the main inspiration, Walk the Line. … the wrong kid died!

Instead of talking about this awful movie here – check out my podcast about it. The Worst Movie of the Year.

Imagine Predator, but replace Arnold Schwarzenegger with Reb Brown, the Predator with a bad rip costume of Robocop, cut the budget and the skill to a tenth, and you got Italian schlock field Bruno Mattei’s RoboWar. If cheap Italian rip offs are your thing – I know they are mine… and Tony’s… and Cody’s… and a great deal of my friends – you’ll find plenty to love. Although I’ll admit, I was a little let down after Cody and Tony raving over it. Maybe I expected just a few more steps into the cheese. But it is interesting to see what is essentially a scene by scene remake of Predator (not completely but very close) with a lot less talent on both sides of the camera.

I typed this whole review with only my left foot. I kid. But impressively Irishman Christy Brown, who lived his short life with cerebral palsy, painted and wrote using his. It was one area of this body he had full control of. I’m glad to have finally watched the 1989 Best Actor (Daniel Day-Lewis) and Actress in a Supporting Role (Branda Fricker) winner. I applaud the film for presenting very matter of fact, giving a portrayal of Brown that is not saccharine in it sympathy and feelings. Brown was a man with a life of strife but also had personality, anger, and alcohol issues and not pulling away makes him all that much more real – not merely an inspirational tale. . Many biopics have that tendency to soften the edges for storytelling and sympathy. The strong script also lets us into his mind and the world he grew up within without the on-the-nose reference I spoke about above for Walk Hard. Fascinating and wonderful film.

Next set should be up in a few days!