As I noted in the Carrie (1976) episode of City of Geek’s Stephen King Retrospective We All Watch Down Here, Pet Semetary, the 1983 novel, was my first Stephen King novel (either that or Christine). So it holds a special place in my undead heart. The two Mary Lambert movies, the original in 1989 and the maligned but dammit I like it sequel in 1992, I enjoy with various asteriks attached. They’ll get their own reviews and analysis when the retrospective gets to them in nineteen years. This review will be looking at this film, and will talk about the book itself but we’re leaving the original film out of it for the most part.

Directors Kevin Kolsch & Dennis Widmye Made a minor splash in the horror community with the solid if unexceptional Cronenberg-inspired Starry Eye. Now they make their studio debut with a solid if unexceptional Stephen King adaptation. Pet Semetary 2019 isn’t a bad movie, but it’s not particularly good either. Not a bad time at the movies, I can see and expect reactions from all over the spectrum, and I can see myself agreeing with them.
Pet Semetary was originally adapted by King himself, the first novel he adapted after the short story adaptation of Maximum Overdrive, Silver Bullet from a novella, and Creepshow. The new film is written by Jeff Bulher (who wrote The Prodigy– released and forgotten six weeks ago), from a “screen story by” Matt Greenberg. Yes, that’s a weird film credit. How do have a screen story that isn’t the source book? Well, changes have been made. This isn’t a “in title only” but there are a multitude of differences, enough to warrant this additional writing credit. Not all of them work, but I can appreciate the attempt and I see why they were made.

The core of the story stays the same – a bleak and depressing expression of guilt via the Monkey’s Paw story. Doctor Louis Creed (Jason Clarke) moves his family- wife Rachel (Amy Seimetz in a thankless role) and kids eight year old Ellie (an amazing Jeté Laurence) and toddler son Gage (Hugo Lavoie) – to a country home to escape the blood and buetle of the Boston. Behind his house is both a creepy graveyard, where the local kids bury their pets often killed by the busy trucking road, and a cursed burial ground where the dead come back. But they come back different. After a terrible accident, the grief-stricken Louis makes an awful decision and suffers extreme repercussions.
The film seems aware of the original, and that a great percentage of the audience knows the whole tale. (Yes, I said this same thing in the Carrie review). In so, it rushes through the sets and expectations of familiar scenes. There is little time to breathe and let each moment sit on it’s own and reflect before rushing into the next. Don’t expect scenes of Jud and Louis sitting down to enjoy a beer and talk about life or a non-plot related character marriage moment between Louis and Rachel. It’s all reconfigured to get to the altered third act. The housekeeper there to give dour warning and show something’s sour in the air is eschewed. Friendly Maine “ayuh” Jud Crandall replaced by a more distant and ornery National Treasure John Lithgow (who slides to overly friendly in some scenes, making him a rather unbalanced character). Jud is less of a friend, and more of a way to shove out piles of exposition. There is an addition early in creepy masked kids on the way to bury a dog. Since Jud doesn’t enter the narrative until later, they are there to inform of the burial ground and in order to inject an off kilter feeling early on. It’s too bad they don’t come back after the short moment.
That scene does get the feeling of “this place ain’t right” early on. No matter how one feels about how things play out, the directors build a strong mood, with ample fog, dense lighting, and a general sense of unease. Add in a fantastic score from Hellraiser composer Christopher Young, and all the ingredients are there. But something just doesn’t feel done. 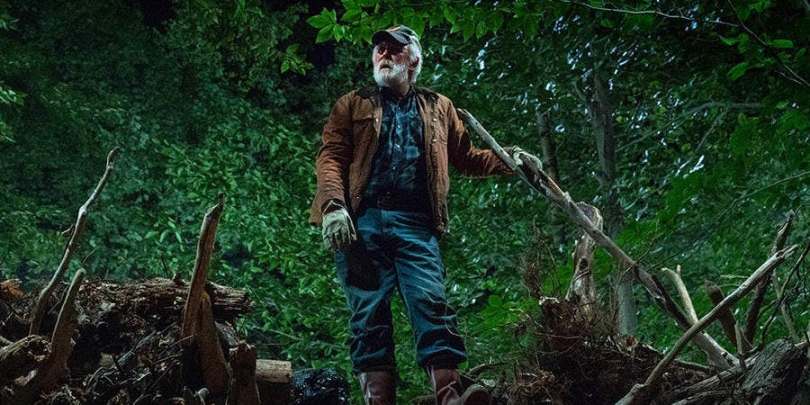 Without giving away the details, I’m glad for the third act alterations. Mostly. I’ve always felt the original way things play out rush through and implications and ideas were left aside for more direct horror. So I guess we get the reverse as I mentioned the familiar moments are rushed through in this Pet Semetary. The changes feel thematically right with the story of Pet Semetary. Pet Semetary is a story of the processing of grief. How holding onto the past keeps one from moving forward, creating a destructive cycle. This cycle made physical in the actions Louis Creed takes. The misteps come in the film’s ultimate resolution; in order to be different and get the shocks of the action, the theme was left behind. Add in a few shots that come off comical and I was taken out a few times.
It would be too easy to just to quote any version of this story and say “Dead is better.” I’ve said time and time again I’m not against remakes and new adaptation if they feel warranted. However, the new Pet Sematary won’t erase the original from cultural memory. Perhaps there isn’t anything to be gained by moving this story to now; it’s a basic tale of grief and family and men making awful decisions with clouded judgement. That’s the same no matter if set now or in 1989. Compare to the re-do of It. The mere changing of the timelines to 80s/now compared to 50s/80s altered – for the better – the story and gave a new feel. Thus, the additions have to be changing story elements, which come at varied result.
Pet Semetary isn’t a bad way to spend two hours. I will see it again – as this is set to post I’ll likely be watching it a second time with Kim as she couldn’t make the screening. I don’t feel dread in sitting it a second time so quickly.

ETA- I enjoyed the film more in my second watch. Not enough to change the grade.

WANT A SECOND OPINION? – We All Watch Down Here’s Amie Simon reviewed it for her site – read it here.