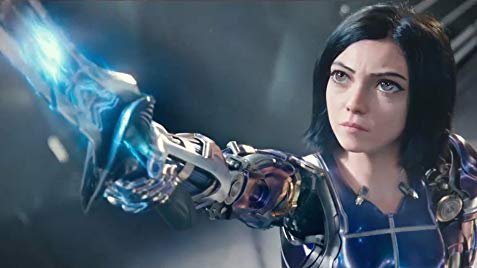 Last weekend’s box office champion Alita: Battle Angel landed with a resounding, “Eh, I guess I might see it.”

Alita is one of those films that spent a good amount of time in Development Hell over the years as writer/producer James Cameron’s other projects repeatedly pushed it back. Despite over 20 years of production starts and stops, the film has finally met the light of day under the direction of Robert Rodriguez. Given the source material is a violence-filled cyberpunk adventure manga, he was a natural choice due to his hefty action background with similar films like Machete and great adaptations of mature content like Sin City.

I am a big fan of Rodriguez’s work, so I was very intrigued by this film. While this wasn’t the greatest spectacle of film I’ve ever seen, it was a fun two-hour romp through a space-cyberpunk-dystopian future, and that’s all I really asked of it. You can see the love both Cameron and Rodriguez share for the source material through the breathtaking cityscapes, character designs and fast-paced action sequences. They seem to have really got the look and feel of the manga as a result, and from what I have read the characters seem to be true to their comic counterparts (though I’m not personally familiar with the manga.) This is a film that clearly has heart and desire behind it. To see that in an age of soulless cash grabs definitely enhances the viewing experience. The action scenes in particular are killer (pun intended) weaving high speed punches and kicks with stunning swordplay as Alita slices through her foes. Stunning sights – be it a roller-demolition derby cyborg-death-fight hybrid, or the peaceful views of the floating city of Zalem – are like candy for the eyes. Characters are enhanced with shiny cybernetics that would make even The Terminator jealous! Honestly one of the main reasons I do recommend seeing the film is just because of how god damn beautiful it all looks.

The actors don’t drop the ball, either. Rosa Salazar does a great job overcoming her strangely massive eyes to give a very good performance as Alita. Stars like Mahershala Ali as interesting yet underdeveloped crime boss Vector, Jennifer Connelly as generic evil scientist Chiren, Christoph Waltz as badass bounty hunter/robot doctor extraordinaire and Jackie Earle Haley as the goliath cyborg enforcer Grewishka all turn in great performances as well, rounding out a very stellar cast. However, I do have an issue with the casting: The movie is so bloated with characters that we wind up not getting enough time with any them.

This leads to my main complaint about the film and something that holds it back from being great; the writing and the pacing. The film feels like it can’t find a rhythm, with a ton of action packed sequences all piled into a short amount of time followed by an incredible amount of exposition needed to set up the next set of crazy action. Alita also suffers from a cardinal sin of recent adaptations; the overabundance of sequel baiting. The film spends a good chunk of its running time trying to set up numerous sequels, and doing this not only hurts this film with numerous plot points being lazily dropped, but it also just assumes that we will see a sequel. There is no real resolution to the plot and the film ends on this awkward “see you next time” scene. That would be fine if this were a TV show or a miniseries, but it makes a two hour feature film feel very unfinished.

Despite its significant flaws, I say it’s worth it to use an AMC A-List or Moviepass and give this film a try. While not reinventing the wheel, it does provide a beautiful world to look at and some truly great action sequences. You’ll have a good time, even if left unsatisfied.