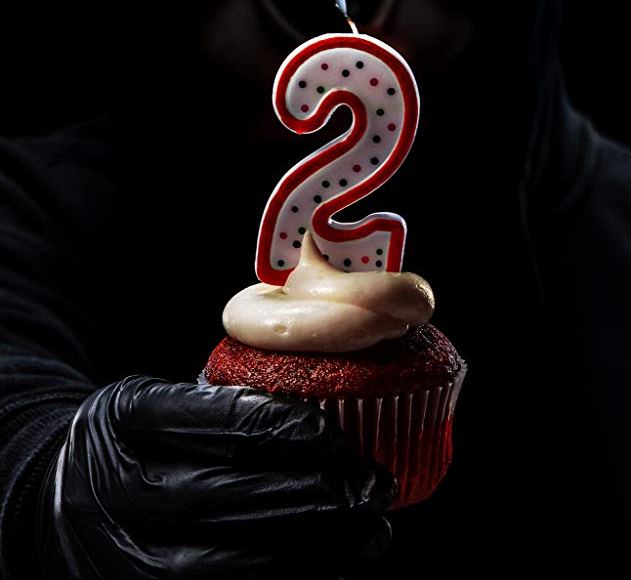 In October of 2017, Happy Death Day, written by Scott Lobdell and directed by Christopher Landon, was a big surprise. What could have been a bad joke movie turned out to be a clever, fun take on the concept – a woman has to relive the day she died until she solves her own murder – and had a great performance by essentially unknown Jessica Rothe. (Short Take here) Like the similarly surprising in its strength The Lego Movie, (Lego 2 review) Happy Death Day recieved a sequel in February of 2019 and is nearly as good as the original.

How does one make a sequel to something as one-and-done as a time loop movie? Returning director Christopher Landon, who also picks up writing duties as well, has to jump though a lot of hoops to make the loop, but it works without too many oops. Heh. The film starts with Ryan (Phi Vu), the roommate of Carter (Israel Broussand), in his own time loop after the events of the first film. After repeating the day after own stabbing by someone with a baby mask, he tells the story to Tree (Jessica Rothe); this sets the story in motion. Turns out there is a time machine he and new characters Samar (Suraj Sharma) and Dre (Sarah Yarkin) made in their science lab. In order to break the loop – a use of the machine the night before set up Tree’s in the first film – they use the machine again. Things go wrong and reset Tree’s loop, shoving her back to the first movie and her birth/death day again. The set up to get this point is a little awkward, as it’s all just to get to Rothe’s loop a second (twelfth?) time. This is where the movie gains its feet and starts running.

That’s not to say it’s bad until then. But the movie isn’t Rothe’s yet; following Vu and he doesn’t have the energy and rubber face of Rothe. Once Tree awakes in this new version of Monday the 18th, it becomes her film again, gets a new mystery to solve, and the film gains life. The returning Rothe – everyone returns even for small bits which is a nice touch – has an infectious energy and doesn’t restrain herself, going for broke. She has more emotional work with the wrinkles in the new loop and she absolutely sells it. Her performance makes one push aside the plotting issues and just sit back enjoy her.

It would be lazy to just rehash the events of the first time around again. The trailers make it seem like it might be, with further kills the next day as another killer, is targeting her friends causing her to kill herself to reset to save them. This isn’t true, as the repetitions have a different focus. The horror is pushed to the background for a more sci-fi approach. That time machine above actually pushed Tree into another dimension, a little better than the one she is in originally – I won’t detail the changes and they need to find the right program to get her home. The whys of what exactly is happening is a little muddled and overly complicated, especially compared to the straightforward first film.

It’s not too much of a distraction, as noted above, I elected just to not think about it as would likely not add up and make my brain hurt (I still can’t figure how some parts of Ryan’s opening loop worked…). There is enough going on to keep the weird plotting from distracting. Happy Death Day 2U  is just as funny as the first time, using the situation and game lead actress to best effect, often turning expectations on their heads. The stalk sequences are less abundant on our second loop, but they are done very well, ratcheting up the tension. The issue with this plotting is there are expected and by the end is  little forced in.

The over-complicated for a simple film plotting issues are the only real down moments for a very enjoyable fun film that is a worthy sequel to the original. With a solid performance by Jessica Rothe and fun and funny twists on the original film, Happy Death Day 2U is a lesser, but not much so, sequel.

I give Happy Death Day 2U a B-