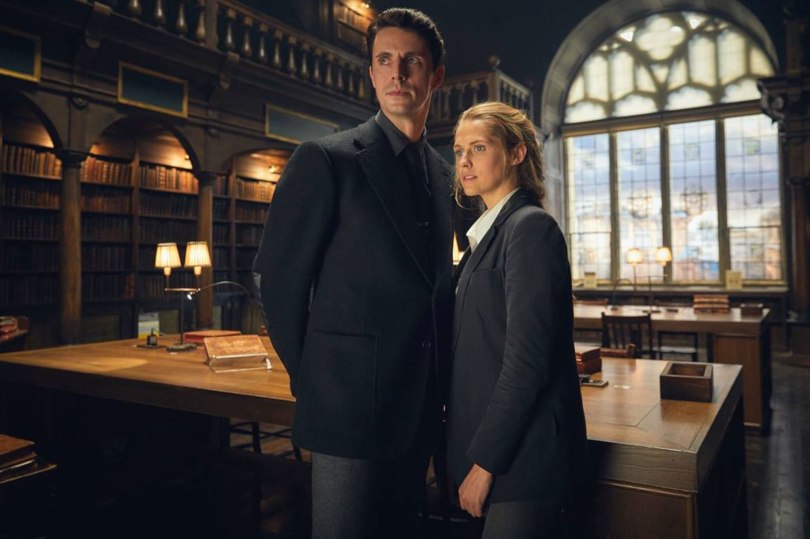 I love a good Vampire Romance. I was hardcore #TeamSpike back when my girlfriends were all mooning over Angel (he got his SOUL for her, come on, if that’s not love, I don’t know what is.) When I first heard about A Discovery of Witches, based off of Deborah Harkness’ All Souls Trilogy, I was intrigued. A witch and a vampire? Yes please!

The first episode begins with Matthew Clairmont (Matthew Goode) doing his best impression of a brooding Marvel hero, while his voice-over tells us the magic creatures of the world must now conceal their existence from humans. Dammit humans. Always ruining the fun.

We then meet Diana Bishop (Teresa Palmer), a witch with questionable control over her powers who seems content to research history and hide away in libraries. Her and I have this in common.  After giving a lecture at Oxford, she runs into an old friend, Gillian (Louise Brealey) a fellow witch. They have coffee and Gillian invites her to meet with her coven. Diana cryptically responds that she doesn’t practice magic anymore after what happened with her parents.

While doing research, she stumbles across a rare manuscript, the Ashmole 782, which Matthew can somehow sense is being read from a distance away, not unlike my ability to sense when Girl Scout cookies have gone on sale. We each have our own special magic. The book reacts strongly to Diana, the words running onto her skin and the book itself burning a symbol onto her hand.

Matthew catches a glimpse of Diana and overhears her talking about the manuscript. Further proving that too much of our lives are now online, he discovers that she is not only a witch, but a direct descendant of Bridget Bishop, the first woman executed during the Salem Witch Trials.

We then meet Marcus (an adorable Edward Bluemel) who is trying to convince his friend James to come out with him. Unswayed, James heads home, but is hit by a car. Obviously dying, a distraught Marcus bites his neck, surprising no one that he is actually a hot, hot vampire. He feeds James some of his own blood, and for a brief moment, James seems to revive, before he dies in Marcus’ arms. Later, he’s interrogated by the police as Matthew listens in. In private, he berates Marcus for what he did and the risks he took. It’s revealed that cases of vampires trying to turn humans has been failing. Matthew and his associate Miriam (Aiysha Hart) have been trying to determine what is happening. They believe the key to it all is the Ashmole 782 manuscript.

After a a restless sleep, Diana calls her Aunt Sara (in incomparable Alex Kingston doing a solid American accent) and her Aunt’s partner Emily (Valarie Pettiford) to tell her what happened. She mentions her experience with the book and is berated by her Aunt for returning the book to the library. Side note, always return your library books.

Having returned to the library to try and relocate the manuscript, an incident with a flying book creates the ultimate meet cute for Matthew and Diana, who pegs him as a Vampire right away. Matthew Goode’s Matthew is both sexy with a hint of danger. He manages to have an entire exchange with Diana where he never noticeably blinks, which should be creepy, but instead is just HOT.

Later, while trying to find out more information on Matthew, he shows up and she correctly calls him out for only being at the library to find her. He asks her for the manuscript and she refuses to help.

She heads out with her friend Sean (Adetomiwa Edun) a muggle who asks about her parents. She reveals that they were murdered by some villagers on a research trip out of the country who suspected them of being witches. It could be pointed out that they most definitely WERE witches, but that doesn’t justify killing them.

Elsewhere, a man with a gun bursts into an empty shack in the woods. A dark haired witch, Satu (Malin Buska) kills him in a ring of fire while a strange older gentleman, Peter (Owen Knoxe), looks on and tells her she will be sworn into the Congregation. Curious.

Back at the library, Matthew once again finds Diana there, who makes a snarky comment about him being out in the sun. Apparently that’s not a thing for this brand of vampires. Storming out of the library, she runs into her friend Gillian again, who watches her with a knowing and mysterious look as she walks away. Later, she meets up with the mysterious Peter and Satu, and tells them what she knows about the manuscript and Diana.

Later, after rowing until dark, Diana is once again surprised by Matthew who grills her about the manuscript. He can’t believe a witch of her “power” would just let go of the book. She maintains that she doesn’t practice witchcraft. After catching a whiff of her jacket, he suddenly looks ready to loose complete control and go for the jugular. Obviously struggling to hold it together, he harshly instructs her to walk by him, “slowly”, and to not turn around.

-Teresa Palmer is no the strongest of actors, especially up against some veterans like Alex Kingston. That being said, she does have a nice chemistry with Goode.

-Matthew Goode would have chemistry with a spoon. That was some top notch casting.

-As someone who hasn’t read the books, I’m curious to see how many of the vampire “tropes” end up being true.

-We only got one small scene with Alex Kingston, I hope there will be more.

-Why are all vampires always so pretty? I would love it if one of them ends up looking like Nosferatu.

A solid, if not flawless, start. I’m intrigued enough to keep watching.