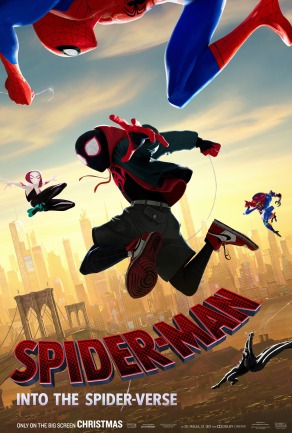 Spider-Man: Into the Spider-Verse is perfect. I am showing my hand for the review with this hyperbolic statement. In the five days since I watched the picture, I’ve mulled it over, talked to others about animated flick- those who have and have not seen the film, and I still cannot find anything bad to say it about it. Many adjectives come to mind to describe Spider-Man: Into the Spider-Verse, none of them are negative.  Some of those positives ones could be colorful, creative, touching, over-flowing, or hilarious. But the one most fitting is “kinetic.”

This movie moves. Not just in pacing – truly the 119 minutes swing by – but in sheer on-screen energy. The camera barely stops moving, nor does anything else in the frame. During the big action set pieces it has this and that coming from every which way. In many films, this may come off as cluttered and busy, but here it is invigorating. I saw a 2D show, but it felt like a 4DX style presentation. This is no doubt helped by the impressive and unique animation style.  It’s a lively mix between pop art and comic-book stylings along with several other animation styles that make sense in the course of the film (more on that later). I loved the minute touches straight out comics, the visual touches used in the source materials to give the reader sounds and feelings: from the word “knock” on doors, “bagel!” (makes sense in the movie itself), and the “Spidey-sense” wiggles as Miles Morales (Shameik Moore, Dope) and friends sense danger and one another.

“Miles and Friends” is a succinct way to talk about the multitude of Spider-People in The Spider-Verse. There’s the main core of six, and several more depending on how you look at it (all-in-all I count ten). I probably should mention the plot amidst all this gushing, right? Stop me if you have heard this one — a young outcast teenager is bit by a radioactive spider and gains superpowers and now must use the great responsibility that comes with his great powers to save the city. Yes, we’ve all heard that one a multitude of times. (I hear Batman’s parents were shot in an alley too… but that’s just a rumor). The movie knows we know it, using the familiar backstory as a backbone to built the several universes together. See, Kingpin (Liev Shrieber) built a super-collider under Brooklyn. That teenager is now Miles Morales. Morales premiered in the Ulitmates-universe in 2011. His ancestry is different than Peter’s – he has a black father and Puerto Rican mother -but he shares many of the same qualities as Peter; awkward and brainy although his skills lie in different fields, he still is forced to make tough decisions as Spider-man and balance out his dual lives. It’s great to have a non-Peter Parker Spider-Man (no offence to Tom Holland, who embodies Peter so well in the MCU). Miles, after his spider bite, comes across his universe’s Spider-Man (Chris Pine) trying to shut it down with Green Goblin and the Prowler trying to stop ol’ webhead. When Spider-Man  is thrown through the particle beam, other versions of himself are thrown into Mile’s life. They must all team up to take down Kingpin before he uses the machine again and tears apart NYC.  No worries, true believers, I won’t go any further into the plot details, just to note loads of surprises, great character moments, and fantastic fight sequences.

Those other versions of Spider-Man are an older, schlubier Peter Parker (Jake Johnson, The New Girl), Gwen Stacy/Spider-Woman/Spider-Gwen (Hailee Steinfeld), hardboiled detective Spider-Man Noir (Nic Cage doing as he does best), Manga styled Sp//der Peni Parker (Kimiko Glenn), and Looney-tunes like Spider-Ham Peter Porker (John Mulaney). Whew, lots of people! Lots of plotting! But it’s handled deftly, moving through plot and character with ease, neither underwritten or over-stuffed. There is a solid heart here too. I don’t feel ashamed to admit I cried multiple times during the course of the film. Stan Lee’s expected cameo was a guaranteed tear for me, but this particular cameo struck home. It’s fitting his first posthumous appearance is with his greatest creation. Here’s to you ,Stan! Excelsior! And to you too Steve Dikto! (don’t worry, Ditko gives his love in the movie too). When the movie ended and the lights came up, I had realized I had cried in pure happiness of the film I just saw. That’s a feat.

These characters create a visual treat as each are animated in the styles of their own source books. It’s quite the sight to see multiple styles of animation interacting in a single frame. It’s like Roger Rabbit to the nth degree (although all CGI some bits look photorealistic, adding another layer). In addition, this allows a bigger meta narrative to comment on the 50 years of Spider-Man, much like LEGO Batman explored the nearly 80 years of Batman canons ups and downs to make one of the best Batman movies (my heart still goes to Batman Returns). References and jokes come from all over – the Raimi films, 70s Japanese Spider-Man, even Twisted Toyfair Theatre, and only the most eagle eyed will catch them all.

It’s probably not just a coincidence that this approach created the best of Spider-Man movies.  Producers Peter Lord (who also gets screenwriter credit) and Chris Miller previously made the smart-meta Jump Street and The LEGO Movie and produced the other LEGO features. So it’s no surprise Into the Spider-Verse comes together as well as it does. By the by, go check out their first effort Clone High (I wooed a reference to it on a billboard in this flick, truly a better world with a 13th season of this forgotten gem).  Let’s not forget the trio of directors the pair hired – Bob Persichetti, Peter Ramsey, and Rodney Rothman. None have many directing credits previously (Ramsey made Rise of the Guardians five years ago) but all have backgrounds in art design and other technical work. All too often too many cooks spoil the broth, but just like the Too Many Spider-Men, the crew come together to create something wonderful.