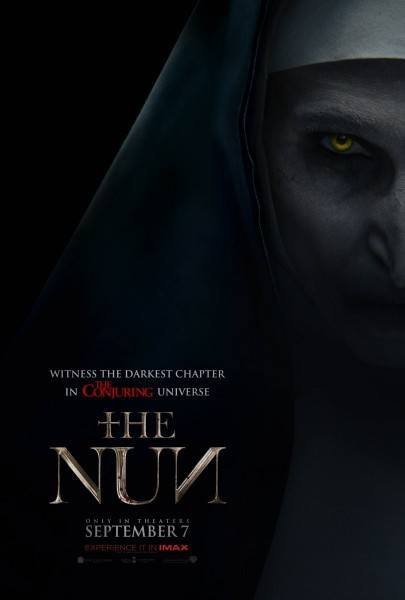 Following the successes of The Conjuring – and its subsequent cinematic universe – comes one of the more interesting spin-offs to date. For those who may be unfamiliar with her, the Nun is probably one of the most terrifying villains of the 21st century. The pale, yellow eyed, demon faced character has led to many nationwide nightmares, but is she enough to carry an entire spin-off? This is my review of 2018’s latest horror flick, The Nun!
The story is set in the early fifties, a couple decades before either main Conjuring film. It revolves around a supposedly cursed Abbey in Romania. “Miracle Hunter” Father Burke (played by Demiàn Bichir) and nun-to-be Sister Irene, (Played by Taissa Farmiga, sister of series lead Vera Farmiga) have been sent by the Catholic Church to investigate the recent, mysterious, and violent suicide of a nun at the Abbey. Why she decided to jump out a window with a noose around her neck becomes startlingly clear – she was avoiding a much worse fate at the claws of our demonic villain.
One of the movies strengths comes into play here: It never drags on. Very quickly we are at the war torn, demon infested Abbey. As the movie tilts into full gear, it does do a great job of keeping the unease and horror coming. There is a strong sense of anxiety as our heroes interact with the nuns at the Abbey, and the ever present threat of the titular villain lurks around every corner. There’s a surprising amount of comic relief that clashes with the marketing slogan “The Darkest Chapter in the Conjuring Universe,” but strangely, it’s welcome (and 95 percent of the time it lands well without killing the horror.) The failings of the plot lay in the overly formulaic jump-scares. The obvious placement of certain spooks and frequent use of fake outs gets a bit tiring, and the movie has a hard time connecting with the audience.
The acting in the film is quite solid as well. Farmiga in particular delivers a strong performance rivaling that of her sister’s. The comic relief character, Frenchie (played by Jonas Bloquet,) was actually quite funny. He provided some great lines reflecting the thoughts of the audience, and he was very charming. He even provided my favorite moment in the film when breaks off a cross headstone in the cemetery in order to escape from the demons. Of course, I would be remiss if I didn’t give praise to the absolutely terrifying Bonnie Aarons, who plays the evil Nun. She is still as horrifying and unnerving as ever and brings an instant sense of danger to every scene she’s in.
The music can get a tad repetitive and bland, which does detract from the film at points. The visuals are fantastic, however. Great set design, wonderful demon makeup and realistic costumes really help to suck the audience into the film, and some of the gore effects are seriously revolting to look at. Not to mention the skillful use of shadows, background movement and camera movement that keep everyone on their toes… even if the subsequent scares fail to deliver. Director Colin Hardy should be commended for getting a surprising amount of quality out of this movie, something that could have easily been as atrocious as Annabelle.
So where does the third Conjuring spin off land? Despite the flaws in scares, soundtrack, and occasionally tone, I feel that the strength of the cast, quality visuals, and surprisingly strong story deliver this film from evil. I rate it a solid 7 out of 10. All in all, the story provides a very entertaining path from start to finish despite its blemishes. Coupled with a large cinema audience, it proved a very fun sit!