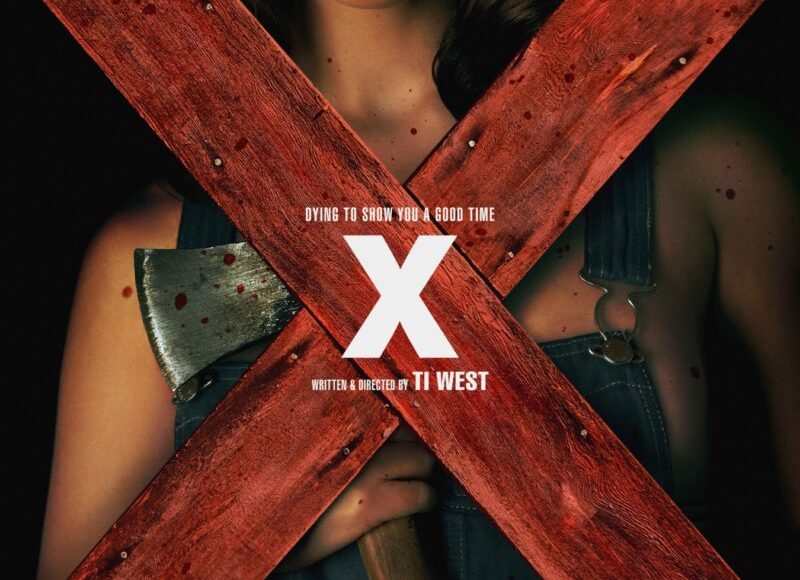 X (2022); Written and Directed by Ti West; Starring Mia Goth, Jenna Ortega, Brittany Snow; Kid Cudi, Martin Henderson; Rated R; 105 min.
X continues a very solid run of movies from writer/director Ti West, Although it doesn’t completely work for me, it landed well enough to currently be my #4 of 2022 (as of March 21/22 when I write this). Without spoiling, but to set reasons; the not working was merely in the payoffs felt underdone to the amazing set-ups. Even with this, West has built a strong film with a great deal of care and detail.

X is no mere slasher tribute. Like West’s other films, it works in conversation with genre history and expectations. House of the Devil, The Innkeepers, Sacrament, and the non-horror In A Valley of Violence are all steeped in the (sub)genre understandings and reversals to those understandings. X also turns the genre on its head by exploring the connections of sex and violence, and how these connections are usually linked and play out.

West does pull from Texas Chain Saw Massacre and Psycho (which gets named checked a few times), the story is not a smashing together of the two (neither of which are technically slasher, but that’s a different conversation). There are nods to other films West and his audience are very familiar with, but avoids screaming HEY HEY HEY get it? It does serve as a better love letter to Texas Chain Saw than the new sequel, that is for certain.

There is such a strong craftsman’s hand to the whole proceedings. It is very impressive. From frame 1, the 1979 aesthetic grips and draws the viewer in.  While the film would not pass as a lost 1979 film, it’s a lived-in world for the characters: one of verisimilitude, not one of a gimmick, or meant to be humorous for the audience of 2022. Outside of cuts to the film-within-the-film, West eschews the easy gags of purposely distressing the movie in a Grindhouse sort of way. That aspect works in that film and other titles, it would have pulled me out of the narrative.

That’s not to say there aren’t novel touches to the presentation outside of the fantastic production value. While living in the loving references to the 1970s horror, X still comes out as a very unique film. Fantastic editing choices connect previously stated sex and violence with other themes, such as how we perceive the elderly and how they reflect upon their own youths. (A huge standout on this is an absolutely beautiful and haunting rendition of Landslide). These choices absolutely draw the viewer into the world and separate the film from the pack.

Also helping to create a fantastic film is a great cast, playing very likable characters. They are not mere knife fodder, but real people and avoidant of caricature. Very sexually active characters in horror often are often not the nicest or most relatable, with any characterization being centered around said sexuality before a death sentence. West’s script goes out of the way to speak to this. Those characters are slightly-sleazy producer Martin Henderson (pulling a McConaughey impersonation), leading man Scott “Kid Cudi” Mescudi, actresses Britany Snow and Mia Goth, along with new scream queen Jenna Ortega as a mousy sound girl and Owen Campbell as a director who is trying to make something more important than it is. He sees the film as a stepping stone, looking down at the genre itself. Is this West making reference to the snooty take of many to “elevated” horror (not the filmmakers themselves but how publicists and “fans” take. I’m not a fan of the term myself) or those who see the genre as beneath them but a way to start.

Everyone is perfectly cast and performed. Goth is by far the stand-out, but she is the lead to expect in many ways. She’s been a favorite up-and-coming actress of mine for years and maybe this will make her the straight-up star she deserves to be. Outside of the unexpected depth given to the main characters, the old couple Harold (Stephen Ure) and Pearl (her actress… a surprise I won’t’ give up) are well explored, not just killer weirdos. They have a history, with a sad pathos over their relationship. Both actors work well through layers of old-age make-up. While the makeup is not very convincing make-up, that’s not the fault of the movie, it never is in anything (looking at you Midnight Mass). Harold and Pearl are compelling villains that will surely join the Horror Villain Canon. It seems West has already finished a prequel film for them; I cannot wait to see it!

And yes, all this character and plot setup leads to violence. Bloody, often grisly violence. Telling how a slasher works its kills is a cheap move on a writer’s point, so I’m not going to do that. This section f the film does lose some of the energy of the start, slightly receding to stalk-and-slash, albeit with twists on expectations and many great moments. However, it comes off a little rushed after the great pacing of the setup.

I look forward to seeing how this back portion will play on me on the second viewing. I had similar feelings after finishing House of the Devil and Innkeepers the first time. I felt both as damned good films but thought missed something and appreciated what West was doing. But in rewatches fulled loved.