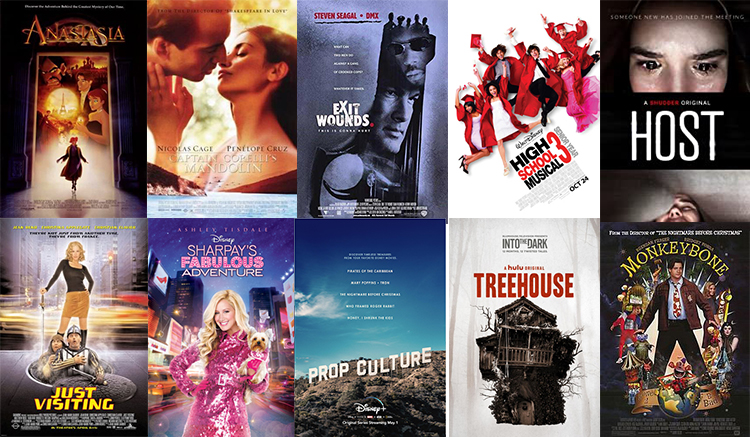 In the midst of 100 Days of Horror, I’m getting in a bunch of other movies too! Some short reviews below! Head to the 100 Days page to see my and other’s daily short horror reviews!

Treehouse is the March 2019 entry to INTO THE DARK on Hulu and is a very weak entry sadly. It’s almost a retelling of New Year New You with far less interesting characters. Jimmi Simpson of Westworld, Rose Red, and a McPoyle on It’s  Always Sunny, is an asshole celebrity chef who visits to his family’s summer estate to get away from some tabloid heat. There he meets a set of women on a bachelor party, they come to the house, he cooks for them and hit on them, and monsters arrive. It’s a slow build, but a dull slow build with a  jerk. Ultimately a lackluster entry. Here’s to the next!

You ready for a ridiculous Nic Cage accent? Well son, I got a great one for you here! Cage is the titular Corelli, an Italian soldier leading a group of opera-singing pacifist soldiers as they are sent a Greek island during the waning years of WWII, where he woos Penelope Cruz (not Greek) from Christian Bale (not Greek) and befriends her dad John Hurt (also… not greek). Oh yeah, the accent. Think Mario Brothers stereotype, Giuseppe Strombol that’s a spicy-a-meat-a-ball! Absolutely ridiculous, but it gives some entertainment to the sluggish melodrama. Captain Corelli’s Mandolin feels like it’s trying really hard to be Big Important War Drama, but fails hard. Especially when we’re supposed to feel -hard- when the Nazis show up to bring the war to the shore.The English Patient this is not.

Another of 2001’s badly rated movies (there will be more as I get caught up). I’ve not seen the French film from the same writer/director and also featuring Jean Reno and Christian Clavier (also writing) as well, so I can’t compare as well for quality. Despite the bad reviews, Just Visiting is a serviceable enough disposal comedy. The jokes miss just more than they hit and there are major shifts in the visiting 12th century Frenchmen’s understanding of modern Chicago depending on what’s needed for whatever broad slapstick joke. I’m interested in seeing the original film (part of a trilogy) to see how well or not it transferred. There is a world of difference between the French and English versions of Dinner for Schmucks, and wonder if Les Visuteures is league above Just visiting. All in all I had some good laughs, mixed with the ones that didn’t quite land. But anytime I see Malcolm McDowell I’m happy.

Pretty standard for corrupt cop Steven Seagal action flick. DMX is surprisingly good as an actor, especially against the block of wood that is Seagal. I don’t think much of the humor landed, this was the period of Anthony Anderson where “loud = laughs” and plot offers exactly zero surprises, though the movie doesn’t seem to be aware. Meh. Not my thing.

Don Bluth hews close to the Disney-type (so much people often think this is Disney), after so long of staying away from them after his leaving the studio years before. Anastasia is an uneven but positive experience. I like the hell out out it, no matter the issues. The animation, mixtures of standard and rotoscope is odd, very loose and jerky; having both extreme detail and underdrawn in the same shot. The villain Rasputin, voiced by Christopher Lloyd, exists mostly separated from the narrative, present to toss issues into the path of the lead as they work their way from St Petersburg to Paris, obstacles that could occur without him. Kinda feels like an last minute add in. The songs are memorable and despite the unevenness it often looks good. Not top tier of the genre, but fine enough.

Oh be still my heart. This DisneyPlus show aims right at it. A wild, wonderful look at the love of filmmaking through the lens of a collector of props used in eight (Disney-related) classic films. Our host’s glee in exploring the costumes, props, sets, and other miscellany with those who created, designed, and used them is infectious. This is the type of thing that will invigorate a love of the hows of film like back in 1993 when Jurassic Park making of made me.

What a wild weird nightmare fuel of a movie. I’m glad I finally saw this notorious bomb (75mil to make, 7 box office). I’ve read Selick was fired half way through production and I can only guess which half was his and which was the rest. I’d be willing to bet (but don’t care enough to dig in to find out) he was more responsible for the Downtown nightmare coma parts and less so the live-action real world stuff. The Downtown portions are wonderfully designed and have a vibrant energy. The real-world parts are often awkward, weirdly quiet (a distinct lack of background music make it feel like a soap opera in some parts) and pretty stock. Let’s talk the Nightmare Downtown part, this section has that weird production design that can look very silly with the wrong hand. In this era, this was far too often the case – The Shadow, The Phantom, and other Burton inspirited production designs. Selick directed The Nightmare Before Christmas, so he’s able to handle this unwieldy task of working with materials that seemed ripped straight from Burton’s wet dreams.

I always loved Brendan Fraser, he’s wonderful at purposefully hamminess and he gets to do so in spades here, both as his lead character – a cartoonist who first goes in a coma and thus down to the nightmare world – and then as the cartoonist’s body puppeted by the titular character (a stop-motion creation voiced by John Turturro in the underworld).  Chris Kattan is used well as an organ donor Fraser’s character possesses to stop the Monkeybone version of himself. I particularly loved the Bob Odendirk-led surgeons racing the reanimated corpse across LA trying to get the organs he’s dropping. Poor Bridget Fonda and Megan Mullany are woefully out of place and look straight-up uncomfortable.

MonkeyBone received awful reviews, and I can see why. Half of it is a wild odd world that has the design of something people will be ready to tear apart, and the rest is very hit or miss and often awkward. Monkeybone gave me whiplash, jumping between “fuck yes, I love this” and “aaarrgh, this is uuuughhh!” with its inconsistent tone and focus. Like Toys, it’s too young facing for adults and too adult facing for kids, leaving a weird limbo. But weird is right, and I have an affinity or anything that leans into it’s weird – damn anyone who doesn’t come along for the ride.

PS damned sure some people involved are into Church of Sub-genius. Lots of reference there

This Shudder-exclusive made-in-the-pandemic screen-horror film is LEGIT. Six friends meet up on Zoom to hold a socially-distancing seance. You can guess it doesn’t go well for them. Host smartly uses the traps and tropes of Zoom (or whatever you use) to create build tension, create scares, and hit hard. There are a TON of jump scares loaded into the 56 minutes, but holy hell do they work. Each is earned and not cheap at all. As with similar found footage films that rely mostly on forced perspective (like the camera set ups in the Paranormal Activity movies – a very uneven series to note), one’s eye is continually darting around – looking for changes, shadows, and the set-up to a scare. In same way of long takes, the continued continuity builds tension to the breaking points. The scares, both loud and subtle, work. The characters are well established for a little we get to know – through their screens they feel like real friends and that goes a long way. And the simple effects are honestly impressive. The trickery has to be more well hidden in an unchanging perspective and I give director Savage and his team so much credit for what they accomplished. Host does more in it’s short run time than other films do in twice as much.

While I do have a soft spot for the first of these films (see a previous review entry, if you’re lucky I’ll remember to link it when I post this), I didn’t care for either of the sequels very much. The characters seem simpler, and their interactions more forced to keep in the line already drawn for them, the songs are forgettable and repetitious (especially Troy and Gabriela’s nearly endless number of duets in the third entry) and choreography nearly nonexistent. Both have not nearly enough of Shapay and Ryan Evans, easily the most entertaining parts of these films. They also have a a few too many scoops of “I don’t think this is how it works” for my taste, between no one else working at the Country Club – the students seem to be the whole of the staff and work all day every day- and how exactly this musical works in the third part.

Which leads us to the 4th film in the franchise (and yes, I’m hitting th TV show on D+ soon), Sharpay’s Fabulous Adventure.

This spin off of the High School Musical series follows popular annoying brat Sharpay (so the title isn’t a lie) as she gets an audition on Broadway. While not great, this was far more palatable than I expected. I expected a highly annoying loud screeching glory of excess, but instead it’s the Big Ego Leans about Hubris. Not too much, Shapay and still very much herself at the end (and gets exactly what she wants, it is DisneyChannel after all), but Ashley Tisdale andher obvious wig play it well enough. There is definitely a lot of “yeah, that’s not how a Broadway show works, and everyone involved with making this knows that so why do it this way?” that drives me nuts, but I didn’t hate this flick, and found it more entertaining than the last two High School Musical movies. PS – Despite the much more talented Evans twin Ryan attending Julliard, and thus being IN NYC, he gets just one slight mention when Sharpay talks of her love of theater. It’s an odd exclusion and screams to be addressed.