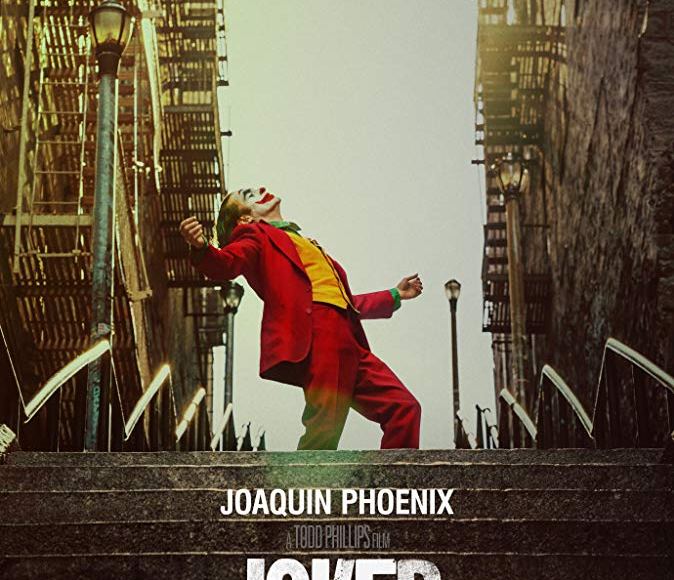 Bob’s review follows. But don’t forget to see Tony’s at THE SUNBREAK. (Also, thanks Tony for giving the review an edit. It really helped)

If Todd Phillip’s Joker has anything going for it, it’s an attempted down-to-earth take on super-villainy, free from the constraints and expectations of comic book trappings in a world we know will eventually be filled with spandex and superheroes. This trash-strewn Gotham City of 1981 invokes a dirty, grimier period of cinema and city, where 42nd Street is forever and there is little hope for any Superman to save the world from darkness.

In that end, Lawrence Sher’s cinematography nails the feel of the films the movies desperately wants to emulate. It’s far away from the cheery and essentially light Marvel Cinematic Universe (which I wholeheartedly love), and it’s even more dour than the much maligned other DC films, none of which really connect to Joker (this is fine).

This is still Batman’s world, but not any version seen previously. In case you thought this may just name check a few Dark Knight aspects and stand on its own, there are many direct connections, all forced and inspiring everything from a “really” look to my eyes rolling so hard I was looking into the projection booth.

The Joker’s named Arthur Fleck (he’s normally without name or backstory save Jack Nicholson’s Jack Napier in Tim Burton’s Batman). Fleck has no powers, and no power in life except accidentally starting a revolution by shooting three Yuppie Wayne Enterprises employees in an act of self-defense. Stripping away the theatricality of the Clown Prince of Crime to attempt to present a story of that One Bad Day that made the villain who he is, is a refreshing take on the franchise. Yet, it is rather unnecessary.

Just as Rob Zombie stripped Michael Myers of mystery by giving him a backstory in his take on Halloween, Todd Phillips’ takes the master of controlled (on his end) chaos almost goes against the whole idea of the character, an abstract foil to Bruce Wayne and Batman. Unneeded or not, here we are.

Many of the interviews, write-ups, reviews, etc of the Todd Phillips directed (and co-written with Scott Silvers) Joker have compared the 2019 Elseworlds-ish origin story of Batman’s most notable nemesis to many of the films by master director Martin Scorsese. The reasoning is obvious. Hell Scorsese was originally on board to helm the film before jumping off to finally make The Irishman for Netflix.

It’s been said that Joker is what it would look like if Scorsese tried his hand at a comic-book movie.   But it isn’t. Joker is someone who saw Scorsese films, particularly Taxi Driver, Mean Streets, and The King of Comedy  (in an interesting casting choice, Robert DeNiro plays a version of the Jerry Lewis role here) but who couldn’t understand why they work they way they do. In other words, not that much different than the hordes of Quentin Tarantino and Kevin Smith imitations of the last twenty-five years.  (We all know Scorsese’s film oeuvre isn’t just the crime flicks, BTW: let’s just toss out there to go watch Hugo, Alice Doesn’t Live Here Anymore, and After Hours).

Like Scorsese often does, Phillips presents a villain as a hero in his own story. And often his “heroes” are far from good people. That’s why we love to watch Travis Bickle, Rufus Pupkin,or Jordan Belfort. We get to slide into the head of someone we hopefully cannot truly identify, with as they tell us why their actions are justified. (Even though we also know those actions aren’t). These men are kept an arm’s distance away, with a level of satire or social-commentary built in.

However, Joker leaves out the Scorsese sheen of satire, presenting Arthur Fleck (Joaquin Phoenix) as a direct and straight-forward protagonist: a man who cracks after being beaten and broken by the system. He’s had enough, and society must crumble. The viewer, apparently, is meant to completely understand and follow his action as justified, and we’re supposed to believe this man is the “hero” Gotham needs and deserves.

There is a kernel of truth and reason mixed in though. IRL, the system does fail those who need it most, in favor of those with money and power such as Thomas Wayne. Fleck loses access to his medication and social worker when the social worker’s entire department is closed for budget cuts. We live in a world where people in need, whether it be from mental illness, addiction, or poverty, keep finding their support cut off, and society then gets upset when bad things happen due to this.

But this is surrounded and lost in a mishmash of undercooked and misguided conflicting statements. Fleck is a manifesto of the angry male loner. He works an underwhelming job as a party-clown, putting on a smiling face over his severe anger and depression.. He lives with his mother (Francis Conroy) in his forties. He desires the woman down the hall (Zazie Beetz), but she barely knows his name – and considers him to be a threat. (the payoff to her minor part is so ham-fisted and obvious it’s infuriating in its disdain to to the viewer) He’s told he creeps people out, and not to talk to their kids. He just can’t get a break. The whole world is against him, he rants no one listens to anything he has to say. Everyone but his mother is the enemy. He’s God’s lonely man.  Fleck is an incel as he can be. What’s worse, his actions are ultimately blamed on mental illness, directly stated in the climax, giving more backing to presenting the mentally ill as a threat rather than the regular people they are.

It’s a shame Joaquin Phoenix is forced to try to make a compelling performance from this. The man is a fantastic performer who gives credence and care to his roles. He’s saddled with a script that gives him little to do in the end. Coming out of the film, I praised his performance. A day later as I write this review,  I have pulled around a bit on this.

He surely gives an interesting performance in the same way Jack Nicholson does as Jack Torrence in The Shining. But both of these are starting at 11. Men who are already lost-causes, two seconds away from violence. There is no arc. Performance wise they can be moved around their films with no difference in how they are behaving.  The character’s an empty cipher meant for the viewer to pour themselves into.

For an origin story, there is precious little true backstory. A moment of extreme abuse, a life-time of caring for his mother in the evenings, and a mention of committal. Who is Fleck, really? Phillips doesn’t seem care.

Ultimately, Joker is a tone-deaf film, providing either wrong-headed social-commentary directly or underdone ideas it feels are grander.

We know in the real-world how awful the rich and powerful can be. In Joker’s Gotham City, this is a sketch of an idea. We’re expected to bring our personal knowledge in to inform the background. “EAT THE RICH” is emblazoned on newspapers, and people flock behind Fleck’s actions with anger. But the viewer isn’t given a reason for this anger in this Gotham. In our world, we know it’s righteous because we know Gotham City is a shithole. These motivations aren’t so clear in the movie.

The garbage strike providing the grimy, trash-ridden streets isn’t given a why, either. Is it conditions of work? The pay? We can infer a power struggle, but it’s just an excuse to give a dirty city (to hearken to Taxi Driver) trash on the sidewalk for the rain to wash away.

Through all its pomp and anger and muddled messaging, Joker just doesn’t work. On top of everything, it is dull and repetitive, slogging on from one scene to another, powered by an awkward and on-the-red-clown-nose script. Any time the sledgehammer Phillips wields hits the nail, it is purely by accident rather than design.

There are moments that almost work, where a glimmer of a good film shines through and where it almost feels poignant with something to actually say. But each time this occurs, it’s not long however before it’s lost in the weeds. Like the Eli Roth directed Death Wish of last year, Joker is the wrong movie for the wrong time. People who mistakenly idolize Travis Bickle, Jordan Belfort, or even Tyler Durden will have a new hero. Everyone else will worry for them.