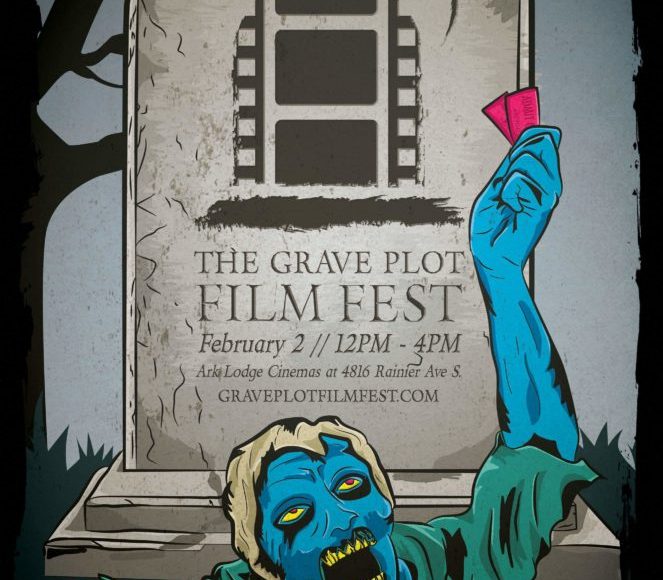 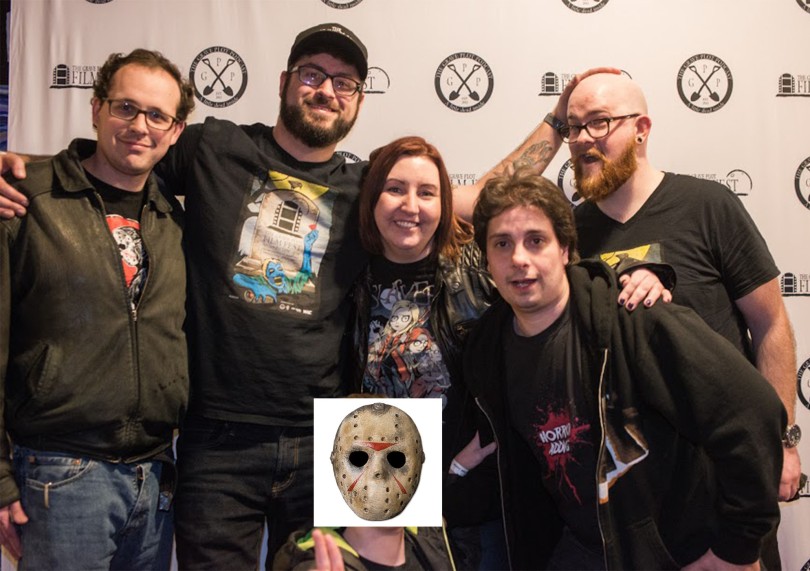 On February 2nd, 2019, I was an audience member for the inaugural edition of The Grave Plot Film Fest. Our friends SkeleTony and Taylor of Terror have been doing their wonderful horror podcast for about six years or so (If I’m wrong, let me know guys; linkie – https://graveplotpodcast.com/), and they have now started into a short-film fest! Short both in the content is all shorts under 15 minutes, and short as all in 4 hours on a Saturday afternoon. That Saturday is my wife’s birthday so good thing I wasn’t gone all day!

And it’s at one of my favorite cinemas, my local 4-screen Ark Lodge in Columbia City, Seattle, Washington. (http://www.arklodgecinemas.com/) A nice 7 minute drive from my house! And the icing on the cake is watching the films with other site and personal friends Danny Knightmare and Gory B. Movie from Horror Addicts – check out their channel here: https://www.youtube.com/channel/UChNY5V5WCOCQCNG3Cy4EDgQ.

Tony, Taylor, and their panel picked 23 short flicks for our viewing pleasure! Below are some notes on each of them, as spoiler free as possible. I’m a judge for the Crypticon Film Fest (obligatory Crypticon plug – come out to the con in May!) and only a handful overlapped with the 200 or so I’ve seen for that! I wonder how many will be seen at Bone Bat Comedy of Horrors in April!? (www.bonehand.com; and check out their podcast too!) 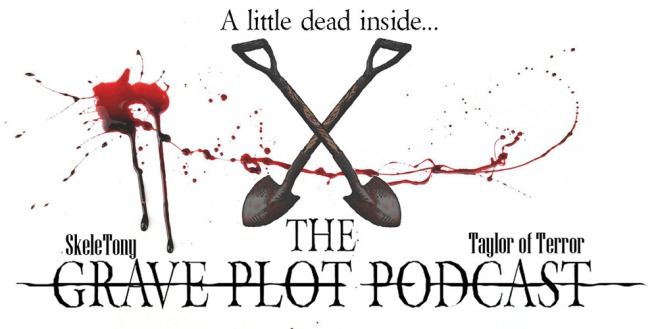 NOTE: I started this review a week after the festival due to scheduling issues, I apologize for details I have gotten wrong.

The Man Who Loved Flowers, Canada, directed by Darcy Love

Based on a story by Stephen King from The Night Shift collection, our first film is a simple story of a boy bringing flowers to his love. But she says the name he calls her isn’t the same… then gets get messy. Well shot, with a solid build of tension; enough the end is a big surprise and a shock. I dug it.

A continuously surprising film with a a clever and heartbreaking story at it’s core. A young father is confronted by a robotic version himself in his kitchen. I applaud the editing, cutting just right between the multiple versions of the dad. Done well enough to think there are multiple actors instead of just him.

One of the best of the fest, Zoe finds a parent looking for daughter Zoe in the middle of a zombie breakout. The make-up is fantastic, some of the best zombie make-up I’ve seen in ages. The gore is solid with clever deaths as well. For a short, it feels like a bigger film with fantastic production value – one can see it’s a single street in thinking about it, but it feels like it could be a cut from a larger film.

One of the things about watching tons of shorts – from festivals like the ones above and SIFF, various websites, etc, – is watching the same shorts multiple times. Last couple years there are two I keep seeing. Mouse and The Party.  Good thing both are good ones.

We’ve all been there, even more so as we get older. Your neighbors will not stop partying. After three nights in a row at still going at 3am, a 30something couple storm a party to get the young people to shut the hell up. As you expect, it doesn’t go well. Blood flows, the audience laughs, and you’ll be happy. It’s a simple premise done well. The length is just perfect, not dragging things out, nor cutting off before you get what you want.

If shorter, this film would have been much stronger. It drags on the front half, before revealing the well designed monster. I’m all for taking one’s time to get tension but gonna build, but Gotas gets repetitive after a while. The shock is a good turn, although doesn’t quite add up. Plenty of blood!

I’m all in for any Bigfoot film. This one is a CG animated comedy. It has the feel of a student film long enough and just refined enough to submit. Here finds a dweebish dude trying to hit on a woman at a bar and walk her back to her car when they come under Sasquash attack. The pacing is odd due to the nature of the animation but the idea and the love are there. Clever jokes and a nice look help as well.

A fine homage to the supernatural slashers of the 80s (big nods to John Carpenter’s The Fog). Two sisters, one babysitting the other, in a large estate are menaced by a killer resembling the hangman from the word game. That came out silly, but the short isn’t. The design is simple but effective. This is one of my top films of the set, from the look to the slasher-stalk action. This could be the opening scene in a longer film, and love it.

Someone is killing teenagers in the rainsoaked, empty streets of a small town. What will happen with a strange man picks up a teenager skateboarder. As it’s a short, you can expect a twist- and likely what it is – but it’s well done and has a stark quiet that really drives the film forward.

I wanted to like this more than I did. I appreciate the look and idea of the film but it didn’t quite land for me. Emma is a pregnant documentary filmmaker visiting her husband’s Austrian village and the the legend around it. After an accident, she is taken by the townspeople and learns all about the pagan rituals the hard way. I honestly don’t remember what happened, which doesn’t speak to it hitting me within the 22 other shorts. I want to say there was a good amount of gore and deaths as it goes to shit for everything but I’m not sure…

A goofy, fun, tongue-in-cheek creature feature. I loved looking at the abandoned nuclear facility – that was enough to get me to love it, let alone adding in a fuckin’ bear!.. I mean pterodactyl! It gets revenge on some campers who stole her egg. Gleefully presented with love of bad creature features.

An unfortunate set of police officers follow a lead into a large warehouse. Of course there is a secret within and the poor group comes across it. Blood and gore abound. There is a good build as things lead up; we know something is wrong and its fun to start to figure it out why. Great look and use of location. I dig it.

This is another one I know had a big shift but I cannot remember the shift. I do recall the first half lovingly steals from Scream. That influence is very obvious. Even if I can’t recall the details of what happened, this has a fantastic look to it – it also reminded me of the bright colors and design of the 60s. That hold ups in my mind at this point – continually thinking “what a great shot”. Dammit why can’t I remember what happened though?

What if a snuff film was treated with the same love a regular film, and was given a plot? A crew kidnap and torture a young woman; the damage they inflict on her is set to a physical take on their deteriorating relationship. Presented as a behind-the-scenes documentary, I loved this film – and it reflects out to the trials of making a movie.. It’s a bit too long – belaboring it’s jokes, stretching the concept to it’s breaking point, but for what it is, it works. Yes, it’s humor based upon continual damage on a young woman. If you can stomach that, you’ll find great fun in Director’s Cut.

Although at the time I voted for a different film – still to come – The Desecrated is ultimately my favorite of the festival. A morgue attendant has a very scary night, alone with several dead bodes (as morgue attendants will often do in movies). This is expertly made, creating tensions and horrific jolts. It actually got under my skin and had me wondering where we’d be heading. The tone is incredibly spooky and the sound design brings it home. Seek this out. you’ll not regret it.

Short flick that doesn’t overstay it’s welcome, based in a single plot point. But damned if doesn’t use it best of ability. On an empty stretch of road, abandoned vehicles mix with new ones occupied by families. What happened to cause this traffic? The title tells you, but it builds well with excellent creature design.

Talk about a single moment. This’ns just 45 seconds long, give or take; ending with a huge laugh. Simple and perfect in it’s quickness. Chop Chop.

Love a good Windego story. A couple retreats to a snowy mountain cabin to reconnect. Too bad a woman-shaped monster is nearby to disrupt their trip. Tension and gore abound with a strong creature design in the Windego. There is a sharpness to the story-telling and in the teeth 🙂

It’s hard to truly look at it, as the projected version lacked subtitles. It does go a great deal to note without them, we could still essentially follow the story. In an animated world where fantasy creatures live among humans, a couple finds yet another of their house daemons has been killed. They must go search for a new one, and discuss their troubles as they do so. The animation was wonderful, the designs were simple but notable. We were able to pick up solid humor from the looks and reactions, even if couldn’t tell exactly what was said.

A man takes advantage, okay let’s cut that  – rapes, an unconscious woman he took home from the bar. Luckily for her, she seems to have a personal demon called a Dodah there to keep him from leaving the house before she wakes up. It does go on a little longer than it should, becoming a little repetitive, but it is often suitably creepy both with the demon and when the woman is in some sort of sleepwalking. Dodah is solid despite the over-length and it’s good to get some comeuppance.

Okay, I’ll admit. This is the one I didn’t like at all. An epidemic leaves an unhappy couple quarantined. She may be infected, either way he was about to leave her when shit went down. This short drags on as they bicker and argue about their situation. Eventually it ended and we moved on.

Starring Lauren Ashley Carter from Dumplin’ and Imitation Girl, Once Bitten… is a goofy, technicolor fun vampire short. Carter is obsessed with a legend of a vampire handyman – expositioned by a cheesy horror host. Carter is great, and it moves at a great clip with fantastic tone. Once Bitten… is a comic blast. Loved it.

It may be a bit of spoiler – but Lobisome has a great looking werewolf. That’s a hard thing to do. But when you namecheck Paul Naschy, you gotta, right? A briefcase hand off in a tiny bathroom goes incredibly wrong, and by use of a small location, tension is high and the use of the location allows a tight film. Plenty of blood!

From the title, you can guess where this may go in this single gag short. But what a gory gag. This was the one I originally placed as my favorite, and it’s still a close second. Sick sense of humor with taking a horror nature to something we all likely have or have had in our house. Fuck yeah.

That’s all she wrote for the Grave Plot Festival. While there were a few that didn’t quite hit for me, I appreciate the selection Tony and Taylor put together for the sold out audience at the Ark Lodge. Can’t wait for next year!