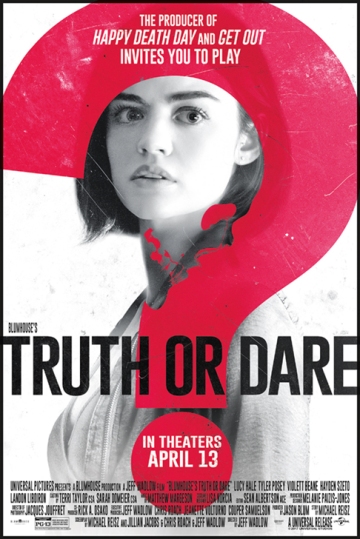 So my wife and I were interested in this flick from the first trailer. Not that we thought it would be good. But it looked so awfully silly. We finally got around to watching it now as we wanted to save it until we were drunk. And we are. And we just finished this movie.

We finally have a movie that dares to ask the question: what if It Follows was stupid?  We have kind of the same set up. A young woman is involuntarily given a curse (but who volunteers for one?) that follows her now that she is part of it. Low rent Daniel Radcliffe (not the real guy; but must have looked close enough as my wife and I both said “Daniel Radcliffe” at the same time) gets her to follow him to an abandoned mission in Mexico while on spring break. She drags along a group of boring and/or annoying friends from her college into the game who are stuck in it as well. The game rotates among her friends asking them “Truth or Dare” and they act on it, or die. I’m reminded of Final Destination in that way (even down to a survivor a previous game making a safe house where nothing can bother him like the survivors of the first of that underrated series of flicks. Fuck yeah I love Final Destination.) Except without the Rube Goldberg type fun of the dispatching. This is PG-13 horror, which can often work in the right way, but here just sets up a very basic kill that’s over without an fanfare. Often bloodless and without any interest. Instead of blood, we get an extreme overuse of a twisted face asking “truth or dare.” It’s like “the Kubrick face.” Like Jason Blum bought a cool Kubrick shot filter for his snapchat and decided to get the most out of the buck. Yes, you don’t buy filters on Snapchat, or at least you didn’t last time I used it like two years ago. But dammit, I had a joke and I used it. Like the stupid filter. Anyway, where was I? Oh yes, blood and kills.

Prepare to see that filter many many times.

We did watch the “unrated” cut which added, according to the back of the DVD, just less of a minute to the movie. It certainly didn’t add anything to tame deaths. Nor did it add any language. We think it was the butt shot of the main woman (Lucy Hale from Pretty Little Liars). There is a scene where the game makes her have sex with a friend. He doesn’t want to really either so it’s a weird to have the game make them commit sexual assault against each other. The camera angle in said shot should have some side-boob but weirdly does not. Outside of the obvious oddness of edits for PG-13 or butt-crack unrated; there are many scenes where it seems like things would continue but they end. Oddly enough, often not just for blood and gore. There is a subplot with one character afraid to come out to his dad. The game makes him, but both times he has to talk to dad, the scene ends. No resolution. Brad is like “my dad’s cool with it.” but it’s just weird. Like dad shows up after the coming out and Brad says “gonna talk to my dad a bit. I’ll catch up later.” and we’re now later. What? Weird.  Also weird, the lighting in this film. Everytime they were in day time, the light blew out the windows. All the light bulbs caused, not lens flares but lines across the frame. Very distracting. Stop blinding out your own movie. The lighting oddity mistakes were more interesting than your characters, man.

This is all very lame. Kinda a waste of a drunk stupid-movie night. This isn’t nearly as directly and blind-blowingly stupid as Slenderman. Now THAT was a mess. I wish I didn’t watch that one sober. This was often just dull. With 4 credited screenwriters, I expected more of entertainingly bad, instead they wrote a just dull enough flick. Sure we laughed at the stupid, but wanted more of it. No doubt this was BAD. But not really the fun kind. Everyone was just so bland. I didn’t hate the characters and actively wanted them to die, but nor did I care for them in anyway. A few times I honestly got some of them confused. Looking over the cast list now, after the movie, I forgot some of them where even in the film and had a death scene. Yeah. Good thing I’m writing this review now, come tomorrow I’ll forget what happened. Too bad this wasn’t as fun bad as director Jeff Wardlaws’s Never Back Down.

Bland and uninspired, Blumhouse’s Truth or Dare (not to confuse with Truth or Dare that came out next year, streaming on Netflix likely confusing people) isn’t as fun or as bad as I wanted it to be. In no way is it a good movie, but I know my genre can often be cheap to produce and easy to make money on. No doubt this turned a profit and paid off that Kubrick filter. I hope it was worth it Jason Blum.

Blergh. I wanted this to be more fun to drunk review.